Tweet
Back to news
Behind the Numbers: Championship scenarios entering the NHRA Toyota Nationals

October 23, 2018
Steve Torrence (Top Fuel), Tanner Gray (Pro Stock) and Mike Janis can clinch titles at The Strip at Las Vegas Motor Speedway. Here's what they need to do to make their championship dreams come true.
Behind the Numbers 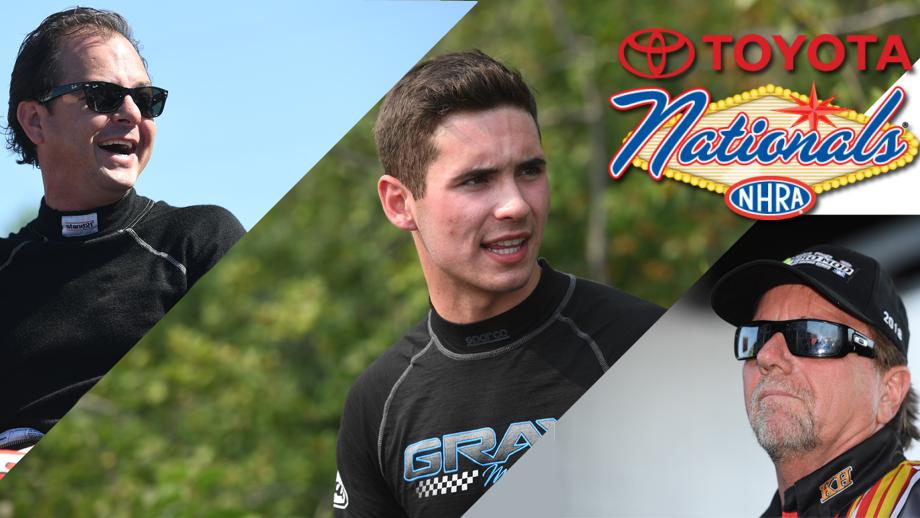 I looked at championship odds a week ago, so this time around I’ll break down what three leaders must do to lock up a championship at the NHRA Toyota Nationals in Las Vegas. For some (Steve Torrence) the scenario is very simple. For others (Tanner Gray) there’s a bit of work ahead.

Neither Robert Hight nor Matt Smith can clinch a championship at The Strip at Las Vegas Motor Speedway in Las Vegas, which leaves plenty of drama on the table for the Auto Club NHRA Finals in Pomona. Torrence, on the other hand, enters Vegas with a chance to lock up his first Top Fuel title.

The Texan leads second-place racer Clay Millican by 169 points and needs to leave Las Vegas up 191 points to clinch the title because he owns the tiebreaker (head-to-head matchups). That means Torrence must extend his lead on Millican by at least three points and go one round further than Millican on Sunday. Alternatively, Torrence will clinch a championship if he goes more than one round further than Millican during eliminations.

Gray leads Jeg Coughlin Jr. by 130 points and holds the tiebreaker, so he needs to extend that lead by 61 points if he wants to celebrate in Sin City. That can be accomplished through a combination of race-day excellence and an average qualifying output from the second-year racer. Gray typically picks up two bonus points a race and qualifies in an average position of fifth, and Coughlin averages four bonus points and an average qualifying position of fourth.

That means Coughlin usually picks up points on Friday and Saturday. Of course, what has happened is not what will happen; besides, I’m only dealing in what can happen. Coughlin can pick up a maximum of 19 points on Gray during qualifying if the JEGS racer earns all 12 bonus points, eight points for qualifying No. 1, and Gray earns one point for qualifying 13th-16th. That would cut Gray’s lead to 111 points — the most he can increase his lead on Coughlin during eliminations is 80.

If you’ve already done the math, you know that leaves Gray at a 191-point lead with the potential for a tie if … he decides he doesn’t want to show up to the Auto Club NHRA Finals. Listen, we don’t hand out the big trophy until it’s official. Here’s the thing: Right now, Gray leads the first tiebreaker against Coughlin, so he’d still clinch his first title in this scenario. See? Easy.

TL;DR: Gray must win the race with Coughlin losing in the first round, regardless of qualifying position, OR extend his lead during qualifying by one point and then go three rounds further.

The E3 Spark Plugs Pro Mod Drag Racing Series presented by J&A Service season wraps up in Las Vegas and we’ve got a good championship battle on our hands. Janis hopes it’s short and sweet, and the only other racer in contention (Rickie Smith) plans to sneak his way back to the top of the heap. Janis leads Smith by 24 points, just more than the 20 awarded for a round victory in the Pro Mod Series (the series follows Mello Yello point rules but does not award qualifying bonus points).

The situation is so simple, I’ll skip right to the too long, didn’t read portion of the tour.

TL;DR: Janis can lock up the championship if Smith fails to qualify OR Janis loses no more than three points to Smith in qualifying (the most he can lose is five) and goes as many rounds as Smith.

Word to the wise: Smith holds the tiebreaker against Janis, so if he picks up four points on the leader during qualifying he can win a title by going an extra round.