Tweet
Back to news
Tanner Gray Victorious in Seattle

PRO STOCK ROUND 2 (1:22 p.m.): After every single higher seed won in the first round, all but one of the higher seeds lost in the second stanza of Pro Stock. Tanner Gray was the only higher seeded racer to survive the second round of racing as he took down Jason Line to book himself a meeting with Vincent Nobile. Gray will get lane choice on the back of his 6.57, which is not quite the quickest lap made. That honor belongs to Deric Kramer, who defeated Erica Enders handily in his American Ethanol Chevy Camaro. Enders, Jeg Coughlin Jr. and Greg Anderson all fell from he top of the qualifying block to the joy of Kramer, Bo Butner and Nobile. 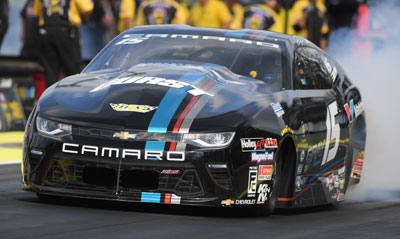 PRO STOCK SEMIFINALS (2:40 p.m.): Deric Kramer is headed to the fourth final round of his career in search of his second win. To get it, he’ll need to beat Tanner Gray. It’s the first meeting of the two Pro Stock racers in a final round and Kramer will get lane choice after making 6.565-second pass to dispatch a red-lighting Bo Butner. Gray defeated Vincent Nobile without much help from his clutch foot. If both racers stay green in the final, it should be a great race as both are at the top of the pack in terms of reaction time. Kramer was .009 second quicker in e.t. in the semi’s, he might need all of it to earn his second Pro Stock Wally.

PRO STOCK FINAL (3:39 p.m.): Tanner Gray, near lane, earned his class-leading fourth Wally of the 2018 season and ninth career victory in just 40 events when Deric Kramer turned on the red light for the sixth time of 2018. After a nightmare NHRA Northwest Nationals in 2017, Gray redeemed himself by leaving Seattle with the Wally in 2018.

PRO STOCK CHAMPION TANNER GRAY: “It’s definitely a credit to the team. Equipment is everything out here -- drivers also play a part – but look at Deric Kramer. He didn’t have the equipment basically his whole career and comes in this year and you’re scared to race the dude now. In previously years if you were racing him in the final, you thought you had it made, but not anymore. He’s doing a fantastic job of driving. I never realized he was as good as he is on the Tree.

On the starting-line burndown and Kramer’s final-round red-light: “I expected him to stage a little quicker than he did because he’d been going in first in Sonoma and did it every run here, but I love that kind of stuff and I think he was OK with it. I didn’t know that he’d red-lighted until I got it into 3rd gear when I finally got the car pretty much straight. As we were staging it felt like I was a little bit pointed to the left and we’ve been doing big wheelies all day and did one again but wasn’t able to get wheel into it until it set the front end down and by the time it was over by the centerline.”